Once you have executed the manufacture of the cards may be that customization is required, it is because it has been created in order to get a control that certifies the legal presence of a user invokes the Entity to which design the card or simply as a marketing element of it.

The most common methods of customization are:

Are those that can be observed without using any special method of reading mechanical or electronic.

texts are printed in relief and can be read by causing positive deformation (ridges) of the material on the side of his reading of estaforma expands your safety, misuse, and that is very complex to smooth the card back and then reprinted in more data. As a final finish for easy reading of data can be inked in black, silver, gold, etc.. letters edited, although its effect is not entirely permanent. This is the only type of printing allows us to capture the data printed on the card by printing machines (bacaladeras) of which we offer our catalog in a separate chapter.

This printing system is similar to the above but the difference is that the deformation is positive, that is generated (hollow) to form the letters. Is also a method that gives safety since the plastic is deformed so that it is very difficult to attempt recovery in order to reuse the card.

Characters are generated by applying a thermal printhead which is composed of a large number of filaments on a consumable, which may be of different colors, and which thus deposited on the plastic card part of the composite depending on variations its temperature, which is controlled by the text or designs that sends the computer. This printing system is flat ie material not deformed or alter its chemical composition, it is simply the deposition of a compound incorporated on a plastic support which is provided in a reel. It is safe as it can be relatively easy to erase the data printed on the card and then exchange. Allows printing of photographs in color or funds made ​​by the sublimation method. The grades obtained are 300 dpi and are well below those achieved with conventional methods of offset. No tools are required for visual interpretation of data hiding. 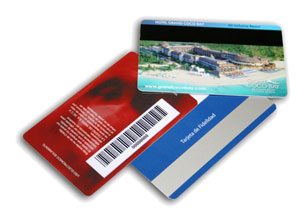 The magnetic stripe that can be incorporated into a plastic card allows recording of data that can later be read by the instruments for this purpose. The magnetic stripe is composed of a plastic substrate on which is deposited a ferritic material which possesses the property of direct its elements according to an applied magnetic field over the same, we can compare to a compass. The needle of the same is directed by a magnetic field, in this case permanent, which is the land and so we move in rotation but always pointing to the same position, but if we could cancel the needle that field would not be forced by any magnetic force and lose orientation, the same goes for the ferrite is in the magnetic stripe, it is oriented when a magnetic flux, and performs a binary value (1 or high) and (0 or low) when you've messed this ferrite. This is a very economical but not too sure because the system itself is a simple data repository and has no software or hardware function itself. Anyway supported by a subsequent management in the programming of magnetic stripe readers can be achieved acceptable levels of security for applications that do not require too much risk of fraud. 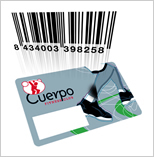 Using the method of thermal printing or print flat has been described previously, you can define what is called barcode. The bar code is based on vertical bars, although there are also stochastic are dotted with more security, which leave blank spaces appropriately separated or background color. must choose the color and we can then read errors, so the colors are extensively tested the combination of black and white. These separations are based on the numeric characters representing. To proceed with the reading requires a laser scanner, it sweeps all the bars of the rectangle that contains the same, the scanner emits a laser light that collects himself and if it detects low light intensity is that it has gone through a dark (black bar) and unlike bright area (white area). This duly processed by the computer indicates a series of ones and zeros (binary code) which gives us the interpretation of data read. There are several script languages ​​barcode but the most widely used, especially for trade, are Ean Ean 8 and 13. The former can work with 7 digits to the user while the eighth digit code is called Lunch and is formed by a mathematical expression that involves the digits chosen by the user, is a way to control read it has not experienced some random error. This method is not too sure as bars to be visible can be copied if more but allows quick identification and the most important tools used in most businesses already exist.

This is a small electronic component which, due to the increasing miniaturization of the same in the course of time, allowed incorporation of the small thickness of a card. In a first fuse called chips were used in which by applying a high voltage is produced destruction of a number of parts of the electronic circuitry inside the chip. When all the fuses had been canceled the card was taken for obsolete and no longer usable, ie that could offer this service was zero. Subsequently developed E2Prom memory chip which unlike those mentioned above could be recorded and erased countless times, which exceeded depreciation cost more optimistic use in many projects. Later it was possible to incorporate small computers CPU is the chip which could be implemented internal security software which increased, especially for applications of electronic money, security. In its wider range, ie microprocessor, provides excellent security for any application in which the card securitization involves the operation of the system. 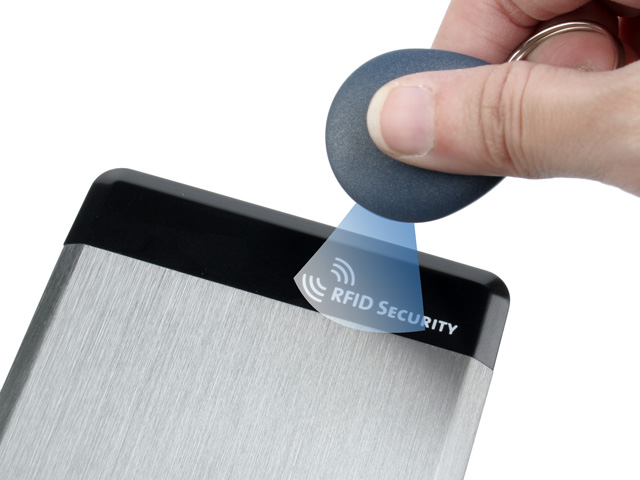 The transmission of any data inserted in the card chip is performed by radio frequency, rather than a physical contact. The operation of RFID tags also called contactless is based on the following principle, any high frequency electromagnetic field (16.56 MHz) generates a power which is capable of powering a small chip as described above, ie chip has no internal energy itself and neither can take it outside because it has no external physical contact, making your environment, which produces an electromagnetic field, and that naturally provoke us with our system. Security is excellent as the card can not be read from the outside and for manipulation must also have the external set us on with his energy and chip software.