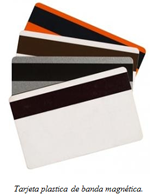 plasticaUna card magnetic stripe is the strip of brown or black that are certain cards. Are used to store a small amount that is considered of importance for certain types of transactions, usually commercial or identification.

In these transactions it is important that the information you have the magnetic strip can be modified easily. The card itself may be made of almost any material inert to magnetism. Are made of paper or some type of plastic and should provide a robust support and to some extent flexible magnetic strip. Is composed of a resin sheet carrying embedded particles large number of ferromagnetic material. Ferromagnetic particles are exposed to the outside to be altered under a magnetic field.

The information is stored in the form of ones and zeros by altering the polarity of the particles. Currently there are several bits coding techniques. The most used are the F2F and the MFM. The second is more complex and can store more information in the same space.

ISO / IEC 7811 describes the F2F coding. Not all plastic cards use the same policy although it does, for example, the international banking network, so any reading device in the world understands the information in a conventional credit card. We describe these regulations.

Each bit has the same "length" in the magnetic stripe. At the beginning of every bit there is a change in the direction of magnetic field and one in the center when the coded bit is 1, the magnetic strip has three tracks with different densities of information. This is measured in bits per inch. One inch equals 25.4 mm.

Encoding tracks: The following table presents the carterísticas of each track:

As shown in the image each track has different capabilities of recording information from the other two, although in all cases using the last bit of character and parity bit. At the beginning and end of each track there are several zeros encoded, so the reader device can be synchronized.

It is generally advisable to add a basic numbering of the tracks that will be recognized by the database software to identify a specific person.